The following gives an overview of all the edits made between the three versions of the film — The original 8m 59s Work Print, the 6m 53s Pre-Release cut, and the final 7m 8s Release version.

END_OF_DOCUMENT_TOKEN_TO_BE_REPLACED

The Elder Predator on set between takes

Complications with the star arose quickly. On the first day of filming it became apparent that, despite their best efforts, the production team had not properly accounted for all of the factors necessary to bring the Elder Predator to life. From the cinematography down to the actor’s performance, it was clear the production had bitten off more than it could chew.

END_OF_DOCUMENT_TOKEN_TO_BE_REPLACED 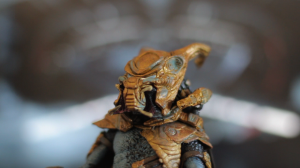 The Elder Predator on the first day of filming.

Much time was spent during pre-production working out exactly how to bring to life the film’s ostensible hero, the Elder Predator. Early concepts revolved around using the same method as used for the human cast — originally paper masks tied on with string, then later match-moved photographic cut-outs. A McFarlane Predator figure, either the original or “City Hunter” models, would then be used for wide-shots.

END_OF_DOCUMENT_TOKEN_TO_BE_REPLACED

Predator: Vengeance for Wolf began its life as the first part of a fan fiction posted on the AvPGalaxy Forums by member B-Rad G on August 20th, 2008. The synopsis was as follows:

Following the events of Aliens vs. Predator: Requiem, an Elder Predator is alerted to the news of the “Wolf” Predator’s death. Enraged by this information, the Elder Predator sets off for Earth to avenge the fallen warrior. Also there’s President Obama eating a bucket of KFC.

END_OF_DOCUMENT_TOKEN_TO_BE_REPLACED

The Elder Predator is on his way to Earth to seek his vengeance. His approaching pod is picked up as an incoming signal at the USA Control Center, where fearless men including the President of the USA try desperately to work out what it is, and what to do about it.